I came across 2 Colombia Barranquilla stamps that are unlisted and appear to be some sort of local label or local charity / tax stamp of some kind.

Both are denominated 1/2c and share a common center design with different inscriptions.

This first stamp is inscribed “Junta de Defensa de Barranquilla”, which, according to Google Translate reads: “Barranquilla Defense Board”.

At the bottom, the printers name is inscribed as well: “LIT. J.L. Arango – Medellin – Col.” – This company “J.L. Arango” in Medellin Colombia printed a few different Colombian issues as well as a number of different local labels for other charities.   According to this Copaphil resource:

As far as the “Barranquilla Defense Board” goes, I so far have not come up with anything about what it was or what it was for.  There is a mention in this blog post which seems to be a mini biography for a man named: Ernesto Cortissoz Alvarez-Correa who was an aviation pioneer in Barranquilla.   According to wikipedia, he died in an airplane accident in 1924.   The blog post, google translated says the following, which I can’t make heads or tails of [bold is mine]:

His death was influenced more determined to fight for the opening of Bocas de Ceniza creating the defense of Barranquilla Board convened in order to assume a more resolute attitude on the issue of Bocas de Ceniza devoting a souvenir in memory of the victims of air crash “Tolima” as it was called the aircraft.

The original in Spanish: 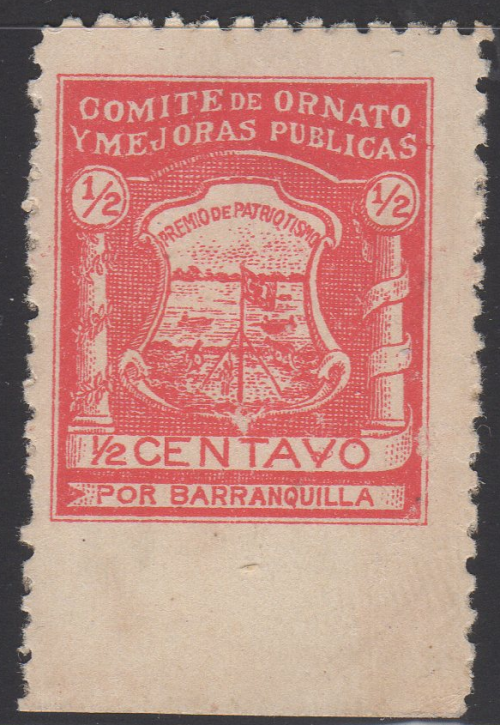 The stamp shares a similar design to the first with a few key differences:

1. The Inscription “Premio De Patriotismo” is a bit less squished in

2. The vines around the left pillar are different in detail

3. No printers inscription at the bottom of the stamp

4. The shading is slightly different throughout.

As with the first issue, I have not found hardly a thing on the internet relating to the Beautification Committee of Barranquilla.  Other than an SCF Post with little information and a brief mention on this page, which (in Spanish), seems to have been written by someone who is mad about something.  Anyway, it mentions a film that was screened as some benefit to the Beautification Committee and Public Improvements of Barranquilla as stated in a newspaper article from June 26th 1918.

When were these stamps printed?

Hard to say really, but I do have a clearer postmarked example, along with some covers.  The postmark on this one shows the year as 1927 with the month illegible. In my hunt for information on these Cinderellas, I happened upon an auction for 3 covers bearing the “Defense Board” stamp which were all Paquebot covers to the USA.

The earliest cover is postmarked in the US on September 19th, 1927 so the stamp was printed sometime before then.

My limited understanding of Paquebot covers is that the letters were stamped and given to the ships purser on it’s voyage to wherever it was going.  Once at its destination, the mail would then be cancelled and sent off.

Here is a closeup of the postmark of the letter above:

This cover was sent from “Banco Alemán Antioqueño” in Barranquilla.  Antioquia is one of the 32 departments (e.g. states) of Colombia.  It was marked confidential and sent to “The Grey International Corporation” in New York.

This second cover, sent to the same Grey International Corporation from the same bank as before but in Medellin.

No return address on this third cover, sent in 1928 to Montgomery Ward & Co in Chicago.  Postmarked in New York with a “Paquebot” postmark.  In addition, this cover contains a “via” stamp from the ship that it traveled on:

This stamp shows that the cover was sent via the S.S. Bridgetown owned by the Colombian Steamship Company in Battery Place, NYC.

I found a reference to this ship on this site:

According to the site:

The Colombian Steamship Co., New York was then formed to operate a route from New York to Puerto Colombia, Cartagena and later to Haiti. The service expanded to the Leeward and Windward Islands and later to Brazil and other U.S. East Coast ports.

Interestingly it doesn’t mention Barranquilla, at least on this site.

I have seen at least 2 or 3 other Barranquilla “Paquebot” covers on eBay and Delcampe.   They almost feel like they were sort of “manufactured” but it is hard to say.   If they postmarks are real then the person creating these covers did go through quite a bit of work.

Cinderellas like these sometimes are a bigger mystery than “official” postage stamps.  There is not always alot of information out there, and it is a challenge to dig up what you can. 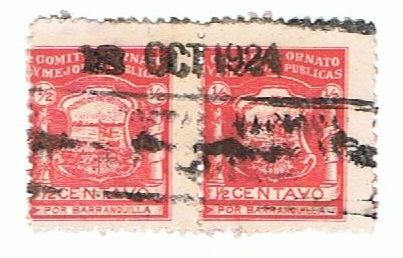