In 1932, Colombia issued a series of stamps featuring various industries.   New designs were introduced in 1935 and 1939, and many of the designs went through various printings through different printing companies.

I don’t have many of the examples noted, but have added images of those I do possess.

During this period, for these “industry type” issues, the following printing companies were used:

We can examine these stamps based on their designs

This stamp is Scott Design Number A131.  There are 2 printings, and an Official Overprint:

The 1935 printing, by Lit. Nacional Bogota presents with 2 perforation varieties (11 and 11.5) as well as various flaws/variations in the lettering.

In addition to the color variation, there are some design flaws/variations as well in this set.  For both the Perf 11 and Perf 11.5 varieties.

This stamp comes in two distinct designs.  Scott type A132 and type A155

Again, this first stamp in the series has at least 2 design size variations, same as the 1c Green.

Unfortunately I don’t have an example of the Litografia Nacional Bogota issue of this stamp.

Below is a copy with the OFICIAL overprint.

Design change in 1935 with the American Bank Note Company:

And finally, all the way out in 1951, the American Bank Note stamp overprinted to publicize the reverson of the Mares oil concession to Columbia

The Coffee Cultivation stamps offer even more varieties to collect.  In all there are 3 distinct designs, and one of those designs in 2 colors.   These are spread across a number of years, and printing companies.   The Scott Types are:  A133, A138, and A176, and there are a total of 16 Major Scott numbers with these designs.

The Lit.Nacional printings are covered in various flaws as well.  In the image below, I focus just on the top inscription, but many variations exist in the bottom inscriptions as well. And finally, the same design but in blue: 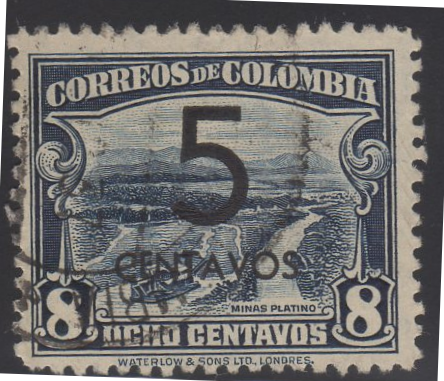 The final industry stamp is the 10c Gold Mining stamp which comes in 2 designs and a number of varieties and printers.

I am missing a few examples of the types, but the below images show the ones in my possession.

And the design change (and color change), Scott type A157

Although these stamps present a challenge at first, they do offer up quite a nice set of varieties.